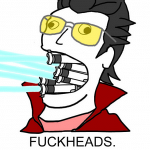 Hi, welcome to Suda51 Wiki! Thanks for your edit to the Harman Smith page.

Heyy. Yeah, I played through The Silver in Japanese. I didn't understand a word of it to be honest. I just wanted to see the game through in SOME capacity :P Vixen Windstorm 17:46, November 25, 2011 (UTC)

Awww, man, that's too bad! D: It looks amazing, from the bits and pieces I've seen. I keep hearing whispers of fan translations going around, though, so if I can find anything I'll post it up here or something. Kidcomrade 10:17, November 26, 2011 (UTC)

Visually it was okay. Some levels had some pretty cool art styles and there are some obvious trademarks of later Grasshopper games that started in The Silver. I'm surprised there's never been a translation released after so long, and the 3DS version isn't going to be a direct port of the PS1 game, at least from what I gather about Suda thinking the original build is too outdated for the modern generation. It would be nice to see the original in English though. Vixen Windstorm 18:11, November 26, 2011 (UTC)

Yeah, I like what art I've seen! I've dug up some of it--not sure how much of it is already on the wiki, actually, so I'll see about uploading the stuff that isn't here yet. And same here! I hope something comes up in time, because yeah, I'm really really curious about the original game. I hope that port goes through too, it's been a while since I've heard anything about it. Kidcomrade 22:59, November 27, 2011 (UTC)

Retrieved from "https://suda51.fandom.com/wiki/User_talk:Kidcomrade?oldid=14498"
Community content is available under CC-BY-SA unless otherwise noted.