Toriko Kusabi (クサビ トリコ, Kusabi Toriko) is a character who was first mentioned in The Silver Case and later appeared in Flower, Sun, and Rain. She is the daughter of detective Tetsuguro Kusabi and a high school student staying in Room 405 of the Flower, Sun, and Rain hotel, with her pet crocodile Christina. The player assumes her role for several brief moments in the game, as she follows the path of Sumio Mondo. She is mysterious and might be quite powerful, and makes a deal with Sundance Shot to bring Sumio back to life after his death. 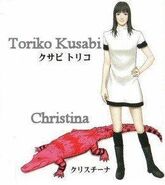 Toriko and Sumio running in the distance
Add a photo to this gallery
Retrieved from "https://suda51.fandom.com/wiki/Toriko_Kusabi?oldid=27867"
Community content is available under CC-BY-SA unless otherwise noted.