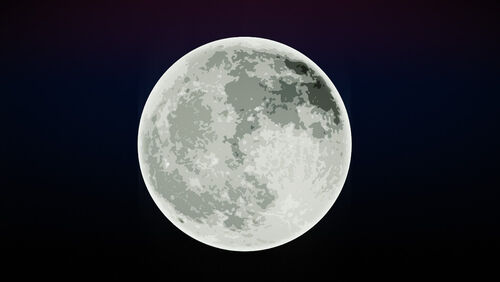 The Moon, a natural satellite orbiting the Earth, is a frequent recurring element in SUDA51 and Grasshopper Manufacture games, especially in Kill the Past titles. The Moon can represent many things, though most notably madness, and sometimes appears concurrently to a suicide. The full phase of the moon is the most commonly displayed.

Killer Is Dead features the moon more heavily than any of the above games, as civilians are actually able to travel to it in the game's setting, and thus actual parts of the game take place on it. Here, it is revealed that the moon contains Dark Matter, which is controlled by the ruler of the Moon on its dark side. Although the ruler is usually the goddess Moon River, David usurps it from her and begins to use the Dark Matter to attack the Earth. The moon changes colors multiple times during the course of the game, usually a shade of purple to represent the Dark Matter. It also turns red near the end of the game due to David's influence.

Retrieved from "https://suda51.fandom.com/wiki/The_Moon?oldid=27244"
Community content is available under CC-BY-SA unless otherwise noted.