Sundance Shot is a character in the world of the Kill the Past games. He first appeared in the opening cutscene and manual of The Silver Case, and made a more proper appearance in Flower, Sun, and Rain. He is also mentioned in The 25th Ward: The Silver Case.

Shot is a member of the Sundance Tribe and one of several Sumio Mondo clones, but unlike the others which are mere stock bodies, Shot has a distinctive identity and personality. However, Toriko Kusabi also accuses him of being Kamui Uehara multiple times. Although both of his eyes are uncovered in The Silver Case, he wears an eyepatch in Flower, Sun, and Rain, suggesting that it hides a Silver Eye. He is the primary antagonist of Flower, Sun, and Rain, and is actually the one putting the bomb onto the plane on each day. In the middle of the game, he kills Sumio by shooting him off of the roof of the Flower, Sun, and Rain, but Toriko strikes a deal to bring him back to life.

In the 25th Ward: The Silver Case it is explained that Osato is Sundance's son explaing Osato's high level of criminal power.

He appears breifly in Travis Strikes Back as a fortune teller who leads Travis Touchdown to the location of Dracula, cause of this it can be assumed Sundance survived the explosion of Losspass Island or another Sumio stock body became Sundance again.

He was also supposed to make an appearance in killer7, as shown by an early trailer and the beta comic seen in Hand in killer7. In the trailer, he says "There are people here who have been dying to see you. Now, close your eyes..." He does not appear in the final game, although the Man in Photograph uses a slightly altered version of his model. Sundance was supposed to be a major recurring ally with the ability to send Harman Smith into the past. 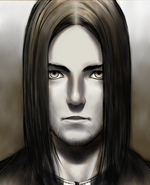 Early killer7 trailer
Add a photo to this gallery
Retrieved from "https://suda51.fandom.com/wiki/Sundance_Shot?oldid=27463"
Community content is available under CC-BY-SA unless otherwise noted.