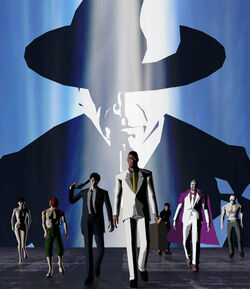 The Killer7, also known as the "Smith Syndicate" or "Harman Alliance", is a group of assassins in the video game of the same name and who comprise the main cast of playable characters and associated members that assist the player.

The First Smith Syndicate was formed by Harman Deltahead in 1775, which is when Harman changed his name to Smith. The only other known persona in the Syndicate was Dimitri Nightmare. However, the Syndicate came to an end only three years later when Harman Smith split from both Dimitri and the "Deltahead" identity, which was the start of the multiple Harmans.

The Second Smith Syndicate was recruited almost two centuries later by Harman Smith, who revived seven personas in 1957 after their murders in exchange for membership in his organization. They quickly became the most famous and skilled assassins in the United States, receiving a large number of government contracts as a result. However, this came to an end of sorts when Emir Parkreiner murdered all six members in a hotel, after which he absorbed their personas (as well as that of Harman's) into himself and took on the identity of Garcian Smith.

Following this, the Second Smith Syndicate (now known as the "Killer7") returned to the government to resume their relationship, albeit one in which Emir failed to realize he was in fact now the entire syndicate. One of the organization's first jobs at this point was to kill Travis Bell, who subsequently joined the Killer7 as an informant, as did other targets (Susie Sumner and Kess BloodySunday), a duo hired to take care of Master Harman (Iwazaru and Samantha), and the man who sold out the original Smith Syndicate to Parkreiner (Yoon-Hyun) among others (the Mad Doctor, Kikazaru and Mizaru). The group continues to loyally work for the government for an indeterminate amount of time, likely years. Garcian establishes a relationship with Christopher Mills, his liaison with the government, working out a system of subtle communication via coded messages left on his answering machine, as well as a typical rendezvous point, the Seattle overpass.

When the "Heaven Smile" crisis breaks, the organization is assigned a number of counter-terrorism operations, first to investigate the cause of the problem, through which they learn that Harman Smith's rival and nemesis, Kun Lan, is behind the attacks. They are then sent to assassinate a foreign spy, Toru Fukushima, as well as a rival assassin, Jean DePaul, and end up learning more about the increasingly tenuous Japan-US relations in the process. They are then summoned by Andrei Ulmeyda to take him out at his own request. Following this, they are assigned a mission to stop an organ-trafficking program run by Pedro Montana and Dan's old partner Curtis Blackburn, and end up pursuing Blackburn to his personal residence in order to kill him. Yet another dangerous rival assassin group appears, this one called the Handsome Men; the Killer7 travel to the Dominican Republic to take down their apparent leader, Trevor Pearlharbor, and end up squaring off with them in Broadway, New York.

Hand in killer7 suggests that there would be at least three and likely more Smith Syndicates throughout the future, although the members of each is mostly unknown. The Third Smith Syndicate comes about in 2050 in order to combat a new form of terror known as "Heaven Tears", although Harman Smith presumably is missing until he reappears in Shanghai, so the leader of this group is unknown. A Fourth Smith Syndicate is never directly mentioned, but is likely a group that Harman forms to battle Kun Lan in 2115 when their fight continues. The Fifth Smith Syndicate is led by OVERDRIVE MASK de Smith, although how MASK could have reappeared after being killed in the Coburn gym is unknown, suggesting it may be somebody else carrying on his legacy. In 2170, he battles yet another monstrous form of terror known as "Final Smiles" who fly to Detroit from the east. Because Harman and Kun Lan continue to battle for eternity, it's likely that other Smith Syndicates could form in the future.