Shining Soul II is an action role-playing video game for Game Boy Advance. It was initially released on July 24, 2003. The game was directed by Akira Ueda, developed by Nextech and Grasshopper Manufacture and published in different regions by Sega, THQ and Atlus. The Entertainment Software Rating Board rated the game E for cartoon violence and alcohol reference.

Shining Soul II is a dungeon crawling hack and slash game featuring eight character classes. Each character can be upgraded to a maximum of 200 levels, and can be customized with a variety of weapons, spells, support abilities and attributes. Certain weapons can also be used differently depending on the class of their wielder. For example, the Warrior's spear attack is a thrust, while the Archer throws his spear over a distance. Each usable spell in the game has its own spellbook, and only classes with that spell on their skills list can use the spellbook to cast the spell.

Each character is able to equip up to three weapons and three items, and can switch between them at any time. Characters can also have an additional three slots by equipping a Backpack or Knapsack. Attacks are performed by tapping the attack button, which can also be held to charge a more powerful attack. Beyond regular equipment, a "Soul" item can also be equipped; it is charged by defeating enemies, and unleashed to inflict massive damage on nearby enemies. Soul items come in various elemental types and levels of effectiveness, and are graded from I through V, with the fifth being the strongest and taking the longest to charge.

Characters also have resistances to a number of elements: Fire, Ice, Thunder, Light, Dark and Poison. These tolerances can be raised by equipment, but also through endurance: by taking damage of a particular elemental kind, they can increase their resistance to it, but being killed by an attack of that type will decrease the resistance level by one point.

Shining Soul II supports a multiplayer mode via the Game Link Cable peripheral. In this mode players explore a dungeon while attacking every monster they encounter. A player can only proceed once all their teammates have passed the exit point on their floor, and if one player dies, their comrades can choose to wait or continue delving into the dungeon. Each player can also swap items with their teammates. Some characters are more efficient than others in multiplayer mode, such as the Rwinn and Prim. 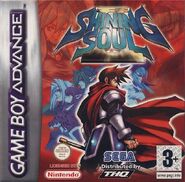 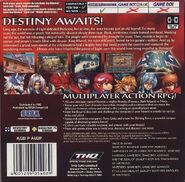 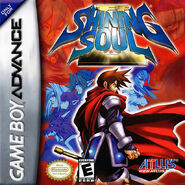 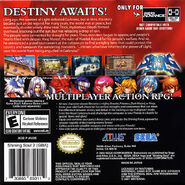 Japanese Value Selection front
Add a photo to this gallery

Retrieved from "https://suda51.fandom.com/wiki/Shining_Soul_II?oldid=23563"
Community content is available under CC-BY-SA unless otherwise noted.