Suda51 Wiki
Register
Don't have an account?
Sign In
Advertisement
in: Characters in Moonlight Syndrome, Characters in The Silver Case, Males,
and 2 more

Ryo Kazan is a playable character in Moonlight Syndrome and a minor character in The Silver Case. He is the younger brother of Kyoko Kazan, with whom he shared an incestuous relationship with. Jealous of this, Sumio Tohba had Kyoko killed. Ryo is later invited to the VIP room of the Lost Highway nightclub by Yayoi Itsushima, where she hands him a bag containing the head of his sister. Following the events of Moonlight Syndrome, Ryo gradually loses his mind until he attacks detective Tetsuguro Kusabi, who chases him into the Cauliflower building and shoots him to death. 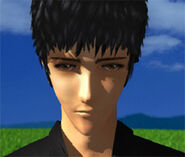