Rumi Tohba is Sumio Tohba's sister, and a character in Moonlight Syndrome. She appears at the end of the game discovering Ryo Kazan sitting in front of the TV with his sister's head inside a paper bag. She also appears in case#0:lunatics in The Silver Case, as well as the Pre-Lunatics comic. In lunatics, she is killed along with Ryo. 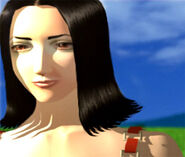 Moonlight Syndrome
Add a photo to this gallery
Retrieved from "https://suda51.fandom.com/wiki/Rumi_Tohba?oldid=26714"
Community content is available under CC-BY-SA unless otherwise noted.