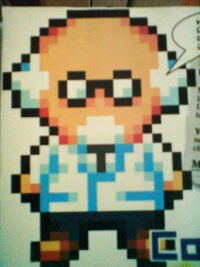 The Professor (先生, sensei or 博士, hakase) is a non-player character in Contact. He resides on the upper screen of the DS, remaining on his ship while player character Terry ventures into the game's environments, though this setup allows him to remain visible to [[[the player]] at all times. Though this would make him appear somewhat useless, it is rather due to advanced age, and he works tirelessly on various inventions to make Terry's progress easier on him. When left to his own devices while Terry is out, the Professor will occasionally make remarks to his pet, Mochi, or directly to the player, on various subjects such as the current area or the state of Terry's HP.

Though the Professor initially positions his relationship with the CosmoNOTs as stemming from their unprovoked antagonism towards him, as the game goes on the player and Terry gradually learn that he is, in fact, stretching the truth. The Professor, a visitor from a distant planet, came across the CosmoNOTs' research when he passed by their planet, and promptly stole the entire supply of Element-117 they had accrued to manufacture Fuel Cells for his spaceship. Naturally, this immediately aroused their anger, and they proceeded to chase him across the globe in an attempt to reclaim their property; he would later position this as their trying to steal from him. He begins to broadcast a long-range distress signal, hoping dearly for aid. This continues for ten years.

The Search for Fuel Cells

Eventually, the Professor is able to contact the player through his or her DS. Quickly explaining the situation (or his version of it), the Professor enlists the player's help in his efforts. However, the arrangement is come to not a moment too soon, as the CosmoNOTs have tracked down the Professor and shoot him down with their own vessel. The Fuel Cells scatter everywhere in planetfall, one of them landing right next to a young boy, Terry; the Professor lands near it, and then, fearing for the boy's safety and looking for another ally, takes Terry aboard. They rocket off but soon crash, beginning the trio's quest.

The Professor urges that the player keep their existence a secret to Terry, though he doesn't explain why; he does, however, make use of their connection on many occasions as they journey across the planet, additionally having the player control and guide Terry to the Fuel Cells. Despite being thwarted on several attempts, the Professor remains positive, and most of the Fuel Cells end up back in his possession.

As the story goes on, several statements by the CosmoNOTs cause Terry (and perhaps the player) to begin to distrust the Professor, as it becomes clear that he is not all that he seems and may in fact be the "bad guy" against the misunderstood, mostly benevolent CosmoNOTs. However, they follow through on their agreement; in the end-of-game battle with Mint Cloudy for the final Fuel Cell, the Professor swoops in with his ship and draws it up through a tractor beam before disappearing forever, apparently showing his true colours.

If the player waits until after the end credits and pokes Mochi, he or she will be treated to an e-mail from the Professor, in which he apologizes for the way things happened and urges that he never intended to deceive either of his companions. He paints a grand picture of their time together, pointing out his hard work on his inventions, and lets the player know that he has preserved himself on the game card, his past self accessible any time he or she wishes to re-experience the old days. He signs off with the declaration that he is about to embark on a journey of self-discovery. After this, there is only the empty ship that was so long filled with the old man and his pet.

With this device, the Professor is able to contact Terry at any time and relay important information to him. When this method is not available for some reason, he uses the player as a medium, though this method is less direct and so not preferable.

With this system, Terry is given a sheet of stickers that unleash various effects when peeled off the page, such as summoning Mochi to attack enemies or completely restoring his health. Arguably the most important decal is the one needed to capture Fuel Cells. Though these stickers lose their adhesive after use and so can only be used once, Terry can grab a fresh sheet by simply returning to the ship and talking to the Professor. As the game goes on, the Professor invents more and more new decals for Terry's use.

Retrieved from "https://suda51.fandom.com/wiki/Professor?oldid=21800"
Community content is available under CC-BY-SA unless otherwise noted.