Start a Wiki
Welcome to Suda51 Wiki,
the ultimate Grasshopper Manufacture archive that you can help edit.
We currently maintain 1,222 articles written in English. 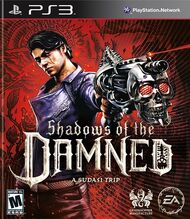 Shadows of the DAMNED is an action-horror video game in development for the PlayStation 3 and Xbox 360 consoles. The game is being directed by Goichi Suda, produced by Shinji Mikami and developed by Grasshopper Manufacture. It will be published on June 7, 2011 by Electronic Arts. The game features protagonist Garcia Hotspur in the City of the Damned, fighting to rescue his girlfriend Paula, who has been transported there following her death. To do this, he enlists the help of Johnson, a demon who transforms into Hotspur's various weapons. The first trailer for Shadows of the DAMNED premiered at the Tokyo Game Show 2010, showing the first footage of Hotspur, Paula and George. IGN has since touched light on some plot and gameplay elements, confirming Hotspur's main opposition to be Flemming, the head of the City of the Damned, who wants to keep Paula for himself. Rather than center around shooting enemies and triggering quicktime events, the principle gameplay will focus on strategically keeping in lighted areas while in combat. This is because enemies veiled in darkness become invulnerable to Hotspur's attacks; darkness will drain Hotspur's health as well. Players must seal "conduits of darkness," which will sometimes be done through puzzle solving. These actions will range from firing at "laughing stag heads with concentrated bursts of light" to feeding "trinkets to cherub gates in order to gain access to the source of the creeping darkness." (more...) 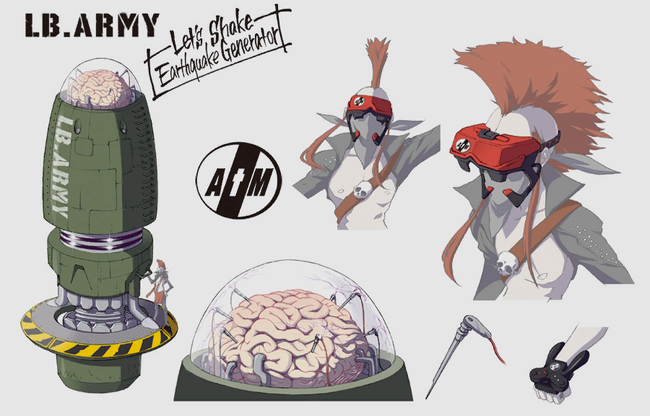 Concept art for the No More Heroes character Letz Shake. The image represents an early phase in the development of No More Heroes, at a time when the character went by the name Let's Shake, sported a primarily red color scheme and donned a wristpad similar in appearance to a Virtual Boy gamepad.

In 2008, Grasshopper Manufacture was said to be working on a horror title with Resident Evil creator Shinji Mikami. In an interview with IGN, Goichi Suda shared that the game will be "about light and shadows," and that anything else would be announced at the Tokyo Game Show 2009. While the game failed to make an appearance at the event, Shadows of the DAMNED made its debut at the Tokyo Game Show 2010 with a teaser trailer. The plot involves Garcia Hotspur, whose girlfriend Paula has recently died and been transported to the City of the Damned. Hotspur enlists the help of a shapeshifting demon named Johnson to free Paula from her Hellish captors, led by Flemming. Shadows of the DAMNED is scheduled for release on June 7, 2011.

On August 18, 2010, it was revealed that Grasshopper Manufacture will be working with publisher Digital Reality to produce a series of downloadable video games for PlayStation Network and Xbox Live Arcade. The first title, Sine Mora, is said to combine "traditional side-scrolling gameplay with unique time manipulation mechanic." This is the only information that has been released regarding the title.

At the Tokyo Game Show 2010, Grasshopper revealed the working title of another project, codename D. This project is geared towards the Xbox 360 and will have Kinect support. A teaser trailer was filmed in live action, and suggests the game will involve fighting evil forces within an amusement park.

Yet another project was announced on October 20, 2010, and is being led by Suda and Sonic the Hedgehog co-creator Yuji Naka. Suda guarantees that "it'll feature stylish action and some really extreme twists," while Naka describes the project as "an action title that takes place in the sky." Naka justified that while Sonic the Hedgehog focused on land-based gameplay and Nights into Dreams... focused on air-based gameplay, he has discovered a new method for the latter, explaining, "That's how this project got started. If I had stuck around at Sega, then I might have used this concept to make a sequel to Nights!"

Retrieved from "https://suda51.fandom.com/wiki/Portal:Test?oldid=12688"
Community content is available under CC-BY-SA unless otherwise noted.