This article is about the high-definition version of the game. For its initial Wii counterpart, see No More Heroes.

No More Heroes: Heroes' Paradise (Nō Moa Hīrōzu: Eiyuutachi no Rakuen) is an action video game developed by feelplus for the PlayStation 3 and Xbox 360 consoles. It is a modified version of Grasshopper Manufacture's 2007 release, No More Heroes, although Grasshopper had no involvement in porting the game from Wii. This high-definition version was initially released on April 15, 2010, and has been published in Japan and Europe, with a North American release pending. On July 28, 2011, a 471 MB demo of the game was released to the North American PlayStation Network, which covers the Townsend Residence stage.[1]

Heroes' Paradise was announced on November 17, 2009, when an issue of Famitsu revealed that No More Heroes would receive a port to both the PlayStation 3 and Xbox 360 consoles. No More Heroes series creator Goichi Suda has confessed to Game Informer that he had no involvement in the port, which was instead developed by feelplus. Heroes' Paradise was the first title produced as part of publisher Marvelous Entertainment's effort to remaster select games in its catalog in high-definition. Marvelous Entertainment naturally reprised its role as publisher for the game in Japan, however Ubisoft, publisher for the franchise in North America, declined localizing the title. Instead, Konami handled the game's release exclusively for PlayStation 3 in Europe and North America, with additional PlayStation Move support.[2]

While Heroes' Paradise is a relatively faithful port, it boasts a handful of changes made to the original build of No More Heroes. Some dialogue was re-recorded; for example, Touchdown's introductory line, "And for you holding the Wii Remote right now" was redubbed, "And for you holding the controller right now." Christel's line, "Too bad there won't be a sequel" was redubbed, "I know. Can't wait to get the sequel," due to the sequel, No More Heroes: Desperate Struggle, which actually did see release. Two of the game's trading cards, Trading Card No. 46 and Trading Card No. 83, were moved from Santa Destroy Junction to the Forest of Bewilderment; the concept art images on most Design Materials trading cards have also been cropped from the bottom, usually cutting out blank canvas but sometimes cutting off the illustrations. The Nintendo 64 resting on Touchdown's motel shelf was altered to a Mega Drive complete with both add-ons, and the layout of the pause menu was completely reworked. In Heroes' Paradise, access to the northern portion of Santa Destroy via bridges has been blocked off. The main bridge has been obstructed by concrete blocks, while the smaller bridge crossing the river has been entirely removed from the map. This means several treasures and dumpster rewards have been relocated to south of these bridges. Because the section of Santa Destroy north of the river has been blocked off in Heroes' Paradise, seven trading cards, 14 Lovikov Balls, eight T-shirts and 12 buried plots of cash have been relocated to other areas of Santa Destroy. You can now open dumpsters/dig spots without getting off Travis' bike. After defeating Dr. Peace, you can examine the spot where Travis left an imprint on after being shot at the start of the fight.

Also noteworthy is the fact that in Japan, the Xbox 360 version of Heroes' Paradise is akin to the bloody version of No More Heroes as it was released in North America in 2008, while the region's PlayStation 3 version is devoid of blood in the same manner as the Japanese and European versions of the original product. Because of this, Japan's ratings board, CERO, labeled the Xbox 360 version with a "Z" rating (equivalent to ESRB's "AO" or edgier "M" titles), while the PlayStation 3 version received a "D" rating (equivalent to standard "M" titles). For the PlayStation 3 version of Heroes' Paradise released to English audiences, blood was restored, as it was in Japan when the game was later reissued as No More Heroes: Red Zone.

The following is a rundown of comparisons between the original Wii version of No More Heroes and its subsequent high-definition ports:

Shortly after the announcement of the game in November 2009, the North American and European publisher of the original, Ubisoft, announced that they would not be localizing the game.[3] On June 28, 2010, Ignition Entertainment, a subsidiary of Ubisoft, when asked if they were publishing the game abroad commented that they "were looking at it [but they] believe that another publisher will publish it."[4] At Gamescom 2010 in August, Konami announced at their press conference that they were bringing only the PlayStation 3 version to North America and Europe in 2011 with added PlayStation Move support.[5] A press release was also given to provide additional information on the improvements made on the Western localization of the game.[6] A North American release was formally announced on the PlayStation Blog by Jeff Reubenstein, formally unveiling the title's Move support as well as PlayStation 3 exclusivity.[2]

Following announcements that Konami would be publishing the game outside Japan, Famitsu reported that the enhanced version of Heroes' Paradise the company was preparing for English audiences would also be released in Japan on July 21, 2011, as a standalone game rather than a patch. feelplus' original port does not include PlayStation Move support or the additional Desperate Struggle bosses, among other things Konami implemented for the overseas version, however these appear in the reissued Red Zone, along with ten missions removed from the original Wii version in 2007 and online leaderboards for a "boss rush" mode.[7] No More Heroes: Red Zone is essentially a Japanese port of the No More Heroes: Heroes' Paradise version released to English audiences.[7] Red Zone also includes new beam katana models, with one apparently modeled after Pure White Lover Bizarre Jelly. The name Red Zone is presumably derived from a quote by Sylvia Christel in the game, where she bellows, "Take it to the red zone!"

By pre-ordering the launch version of Heroes' Paradise from Amazon.co.jp, customers were awarded with bonus EROTICA Portrait cards particular to each format of the game. PlayStation 3 owners were rewarded with the Sexy Cherry set, while Xbox 360 owners were rewarded with the Sweet Mango set.[8] The cards feature erotic poses from the female characters within the game. North American customers who pre-ordered the game from Gamestop received a downloadable content code for PlayStation Network, granting a "flare" design for the Schpeltiger and a Tsubaki MK III OD beam katana.[8] Pre-ordering the game from Amazon.com rewarded customers with a yellow Schepltiger design and Henry Cooldown's Cross Sword.[8]

Sales for the Japanese launch of Heroes' Paradise were slightly better than with the original Wii version. The PlayStation 3 and Xbox 360 versions of the game sold 16,000 and 15,000 units respectively in their first week on sale in the country.[9] When initially released, a bug rendered two trophies in the PlayStation 3 version unobtainable. This has since been corrected by a patch. 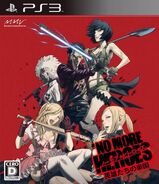 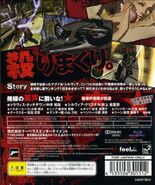 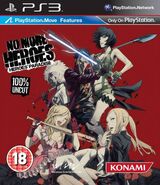 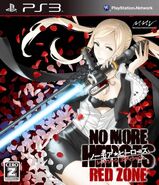 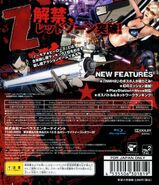 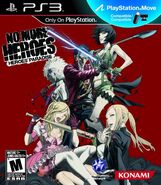 North American front
Add a photo to this gallery 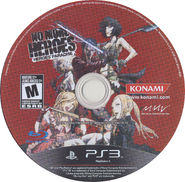 Retrieved from "https://suda51.fandom.com/wiki/No_More_Heroes:_Heroes%27_Paradise?oldid=25385"
Community content is available under CC-BY-SA unless otherwise noted.