This article is about the initial Wii version of the game. For its high-definition counterpart, see No More Heroes: Heroes' Paradise.

Staff of No More Heroes

No More Heroes is an action video game for the Wii console. It is the first game in the No More Heroes video game series, directed by SUDA51, developed by Grasshopper Manufacture and published by Marvelous Interactive Inc., Spike, Ubisoft and Rising Star Games. The Entertainment Software Rating Board rated the game M in North America for "blood and gore, crude humor, intense violence, sexual themes and strong language." It was developed under the working title Heroes.

No More Heroes is somewhat of a spiritual antithesis to SUDA51's previous game, killer7. Though the two games have stylistic similarities, SUDA51 has said that while killer7 focused on political issues, No More Heroes focuses on social ones.

Throughout the game, the player controls the character Travis Touchdown. The game has a free-roaming world, allowing Touchdown to move around on foot or on his motorcycle, the "Schpeltiger". Gameplay is open-ended, with the concession that the player must kill the top ten assassins in order to make the storyline progress. There are numerous part time job side quests to earn money which can be spent on weapons, training sessions, clothes and video tapes.

Control is handled through the Wii Remote and Nunchuk attachment, with the Remote controlling Touchdown's weapon, the beam katana, and the Nunchuk moving him. Most attacks are performed using the A Button, with certain other moves, including the "Death Blow" and sword lock struggles, executed by following on-screen instructions. Further, since the beam katanas run on batteries (until late in the game, when an expensive "Energy Saving Part" has been obtained), they must be charged from time to time by pressing the 1 Button and shaking the Wii Remote. The beam katana can also be upgraded and replaced throughout the game. While the katana does not follow the exact position of the remote, it is able to distinguish between a "high" and "low" position which varies the character stance and the attacks performed. In addition to attacks with the beam katana Touchdown can kick and punch, and when enemies are stunned he can throw them with a number of professional wrestling maneuvers, done by manipulating both the Wii Remote and Nunchuk.

Touchdown has a secondary mode, "Dark Side Mode", that is accessed when three icons line up in a slot machine after a successful Death Blow.

The story follows Travis Touchdown, who is a stereotypical otaku – his motel room decorated with professional wrestling and anime collectibles – living in near poverty in the Motel "NO MORE HEROES" of Santa Destroy. Having run out of money to buy video games and wrestling videos after winning a beam katana in an Internet auction, Touchdown accepts an offer to kill the drifting assassin Helter-Skelter. Doing so earns him rank 11 by the United Assassins Association, a body of assassins with a significantly shady background. After being informed that he has now made himself a target for aspiring assassins, Touchdown sets out to secure himself the coveted position of number one assassin in the UAA. According to the page Touchdown's living room calendar is open to, No More Heroes takes place during the month of August or September. Although the exact year is uncertain, a cosmetics advertisement on a Bart Bash Street bus stop carries a date of 2007.

The Japanese release of the game included a manga with the instruction manual titled United Assassins Association Official Manual that contained much of the backstory about the UAA and Touchdown's first kill. This manga was not included in the North American release of the game, but part of the manga is available on the official website.

Above Travis Touchdown in the UAA are ten other assassins. The person that provides ranks and sets up matches for the assassins is Sylvia Christel, a mysterious and cold woman. Touchdown is aided by a weapons maker named Dr. Naomi, his trainer Thunder Ryu, and a drunk, Randall Lovikov. Naomi sells beam katanas and upgrades for them, Ryu operates a gym and trains Touchdown - allowing him to increase his strength, combos and health for a small fee - and Lovikov teaches Touchdown new maneuvers and techniques.

No More Heroes was initially planned as an Xbox 360 game, until Yasuhiro Wada suggested the Wii and its unique control structure to director SUDA51. SUDA51 has cited the film El Topo among the inspirations for No More Heroes. In one interview he went so far as to say he would try to make it "as violent, or even more violent than Manhunt 2," a game that received an AO rating from the ESRB in its original form. A trailer shown at the March 2007 Game Developers Conference featured Travis Touchdown using the beam katana to decapitate or cut enemies in half, with copious amounts of blood being spilled. Later videos featured clouds of black pixels and objects resembling coins spurting from enemies instead of blood. It was later explained that the "black clouds" version would be released in Japan, while North America and Europe would receive the game with the previously seen blood. Later, however, SUDA51 decided to release the bloodless version in Europe as well. In the North American version, the enemies are generally decapitated or split in half with large quantities of blood gushing from them. Overall, the two versions feature common enemies eventually burning away and a fountain of coins, with or without the inclusion of blood.

Yūsuke Kozaki, who has previously designed characters for Speed Grapher, designed the characters for No More Heroes. Others on the team include costume designer Okama, who designed the OP for Densha Otoko, and mechanics designer Shigeto Koyama, who worked on Eureka Seven as an illustrator.

The No More Heroes Original Sound Tracks, featuring all original compositions by music director Masafumi Takada, was released on January 23, 2008 in Japan. It contains 71 tracks spanning over a 3-disc set. A second, remix soundtrack entitled No More Heroes Sound Tracks: Dark Side was later released on March 14, 2008. The song "Heavenly Star" by Genki Rockets is used in many parts of the game. In the Japanese and European version, a music video of it can be watched on Travis' television, but it was replaced with the original Heroes trailer for the game in the North American version.

Overall, No More Heroes has received positive reviews. The game received a 34/40 from Famitsu. GameSpot gave it an Editor's Choice Award, praising the unique story, gameplay, and sense of humor. X-Play gave the game 5 out of 5, citing "exceptional writing, sharp satire, satisfying game progression, unique visual style, intuitive controls, and a catchy and distinctive soundtrack." X-Play also called it the third best game and best Wii game released in the first half of 2008. Cheat Code Central called the game "a must-buy blast that out-shines all other third-party Wii titles to date." GamePro magazine also praised No More Heroes with a Game of the Month Award and Editor's Choice award, saying "The entries for the best new character of 2008 are closed here's your winner (Travis Touchdown)" and that the game "easily ranks among the Wii's finest titles." GameTrailers, although reviewing the game positively, found its open world to be somewhat limited, an assessment shared by IGN, who went even further, claiming it ground an otherwise exciting game to a dead halt. Despite the mixed review, IGN awarded it "Game of the Month" for January, calling it a "must-play" despite its flaws. Game Informer gave it one of the lowest scores, stating that "the repetition and lack of substance behind the flash" were part of the problems with the game. Nintendo Power gave it a rating of 8 out of 10, stating that "No More Heroes's zany charm and zest for excess go a long way to make up for its weaknesses and called it the 7th best Wii game." In addition, Eurogamer has likened the game to "a crazed, hilarious mash-up of [Grand Theft Auto]'s structure, Metal Gear Solid's flamboyance, Dynasty Warriors' epic melees, Pac-Man's fruit power-ups and the menu of a posh Italian ice-cream parlour."

For the Japanese release, a poorly attended launch event for the game was held on December 6, 2007 at Akihabara's Sofmap Amusement featuring both SUDA51 and Wada Yasuhiro signing copies of the games and giving away premiums. After 20 minutes passed without any purchases, a Famitsu reporter had a copy signed while others took photos. No More Heroes sold approximately 10,000 copies on its first day of release in Japan.

SUDA51 expressed disappointment in the Japanese sales of the game, saying that only Nintendo is doing well in regard to the Wii's success because of its adoption by casual gamers. He later retracted his comment, saying his "point was that No More Heroes, unlike a lot of Nintendo Wii titles currently available is the kind of product which will attract a different kind of consumer to the hardware, i.e. gamers who are looking for a different genre to the products which have been successful on this platform thus far."

Outside of Japan, sales of the game have fared much better. In the United States, around 200,000 copies were been shipped, with about 100,000 copies selling in the first month, as opposed to just 40,000 copies being sold in Japan in its first three months. 160,000 copies were expected to be shipped for the European release.

In a March 15, 2008 interview with Computer and Video Games, SUDA51 expressed interest in directing a No More Heroes sequel for Wii on the condition that the game sold well enough to convince its publishers. Before long the game's first sequel, No More Heroes 2: Desperate Struggle, was shown at the Tokyo Game Show on October 9, 2008. A second sequel was announced at the Nintendo Switch press event on January 12, 2017.

In June 2009, it was announced that publisher Marvelous Entertainment was considering reissuing games in their catalog in high-definition for the PlayStation 3 and Xbox 360 consoles, leading some critics to suspect the success of No More Heroes would ensure it to be remastered as part of the campaign. A February 2010 issue of Famitsu confirmed this would happen, in the form of No More Heroes: Heroes' Paradise. In an interview with Game Informer, SUDA51 confessed that he was not involved with the port of the game, with feelplus instead performing the high-definition touches. Konami later published Heroes' Paradise outside Japan exclusively for PlayStation 3, with extra content. These additional features were in turn included in an updated Japanese Heroes' Paradise, titled No More Heroes: Red Zone.

European front
Add a photo to this gallery 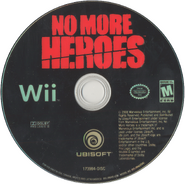 Retrieved from "https://suda51.fandom.com/wiki/No_More_Heroes?oldid=25452"
Community content is available under CC-BY-SA unless otherwise noted.