Shiroyabu is a reckless and overconfident cop. As a Central Police Department officer, he shows enthusiasm to the concept of dying in the line of duty, tries to shoot Akira based on presumption and shows fanboyism towards Tetsugoro Kusabi. As an HC Unit detective, he is considerably more competent; however, he is still prone to recklessness and is frequently berated by his partner, Shinko Kuroyanagi. When left on his own devices in #03 boys don't cry, he acts unnecessarily aggressive and violent towards both his enemies and civilians.

After death-filing and being "overpowered" by Kosuke Kurumizawa, Shiro mellows out considerably and begins carefully planning out his actions. He gains an existential awareness of Kamui Uehara and his own past selves.

In Travis Strikes Again Shiroyabu comes off as aggressive and obsessive over Kamui. After Travis meets with Kurumizawa a death-filed Shiroyabu senses Travis's blood lust and mistakes him for Kamui. He then threatens to shoot himself, and presumably death-file again. Travis then promptly knocks him out with a suplex. 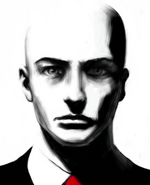 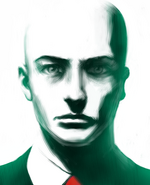 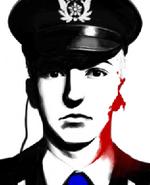 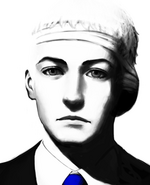 Styled like one of the Okiai hitmen (unused)
Add a photo to this gallery
Retrieved from "https://suda51.fandom.com/wiki/Mokutaro_Shiroyabu?oldid=27491"
Community content is available under CC-BY-SA unless otherwise noted.