Lollipop Chainsaw is an action video game for the Xbox 360 and PlayStation 3 consoles. It was designed by Grasshopper Manufacture and was published on June 12, 2012 by Warner Bros. Interactive Entertainment, which assisted Kadokawa Games in the title's Japan release on June 14. Lollipop Chainsaw stars San Romero High School cheerleader Juliet Starling, who combats a zombie outbreak at her California school. SUDA51 described the title as "a poppy zombie game unlike anything people have ever seen."

In October 2010, 1UP reported that Grasshopper and Kadokawa had entered into a partnership which will last for two games.[1] One of these games, directed by Sonic the Hedgehog co-creator Yuji Naka, will feel similar to Naka's earlier Nights into Dreams... while SUDA51 described the latter game in question, presumably Lollipop Chainsaw, as featuring "stylish action and some really extreme twists." He further iterated that, "I showed the game off to an overseas publisher, and they couldn't stop laughing -- I mean, just bending over and laughing. How many games do you know that can make you laugh like that? When I saw that, myself and [Yoshimi] Yasuda were like 'Yes! This is really gonna work!' I think it's going to be a really big title in the worldwide market."[1]

A Twitter feed for Starling surfaced on August 1, 2011.[2] In January 2012, IGN began hosting a public voting competition in which the winner would portray Starling in a promotion campaign including trailers and gaming exhibition appearances.[3] 10 nominees were selected for the competition,[4] and by the next round only three remained.[5] The winner of the competition was announced on March 2, 2012[5] to be Jessica Nigri.[6][6]

Downloadable content was free to redeem from the date of launch, June 12, 2012, with purchases of Lollipop Chainsaw. Depending on where the game was purchased, this content included such costumes for Starling as the Little Jimmy Urine Outfit, Goth Outfit, Funk Outfit, Pin-up Outfit and the outfit worn by Ash in The Evil Dead. Xbox Live and PlayStation Network may presumably charge money for these character skins after June 12, 2014.

Lollipop Chainsaw reportedly shipped 700,000 units within its first two months on the market, a new record for Grasshopper sales.[5]

High school cheerleader Juliet Starling awakens on her 18th birthday with plans of meeting her boyfriend, Nick Carlyle, before school, attending class, and then gathering for a family celebration afterwards. Unfortunately, when she arrives she is met only with the scene of a zombie outbreak. Luckily, it transpires that she actually hails from a long line of zombie hunters, and is thus well-equipped to deal with the crisis. Hefting a magical chainsaw, she sets to work.

She manages to locate Nick, but not before he sustains a serious zombie bite to the arm. Thinking quickly, Juliet severs his head with her chainsaw, then performs a ritual to keep him from dying. With no other choice, she attaches him to her hip and he accompanies her like this for the rest of the journey. At San Romero High School, they track down her teacher, Morikawa, before encountering Swan, who summons five powerful zombie overlords from the so-called Rotten World into ours.

Juliet swiftly defeats the first of these, rocker Zed, at the nearby Junkyard, then proceeds to the Stadium to take down the Viking Vikke. On the way to this showdown, she runs into her older sister Cordelia several times. At O'Bannon Farm, she meets up with her younger sister, Rosalind, who has purchased a school bus and is driving it around the property; Juliet is called upon to protect it at several junctures, and battles the hippy Mariska at the end. At Funci Fun Centre, she and her father take down Josey, and finally, all four of them combine their abilities to best the biker Lewis LEGEND at the Cathedral.

At this point, however, Swan reveals that this was his plan all along: By defeating each of the five Dark Purveyors and unknowingly allowing them to recite an unholy chant as they expired, Juliet has unleashed an even greater evil: Killabilly, an enormous zombie resembling the late Elvis Presley. However, Juliet is able to triumph with the support of both Nick and Morikawa, who is calling from the afterlife via the phone in her chainsaw. He reveals that the only way to defeat Killabilly is to enter a self-destruct command, which only Nick can deliver, and which will kill him in the process. After some persuasion, Juliet tearfully slots him in and the two kiss goodbye.

Killabilly is destroyed and Nick seemingly killed, but as his head orbits the Earth, Morikawa's disembodied voice informs him that the great powers of the universe have given him a reward, and restored his body, but there is a slight mix-up. As it turns out, they have accidentally given him Morikawa's former body instead of his own, but he and Juliet shrug it off. Everyone then returns to the Starlings' house. In the "Horrid" ending, Juliet's mother has been turned into a zombie, and announces she is about to eat everyone present; in the "Happy" ending, she unleashes a freshly baked birthday cake, and Nick gives her a bouquet of roses and lollipops as a present. 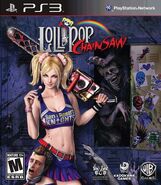 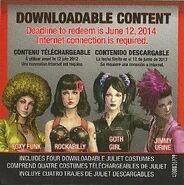 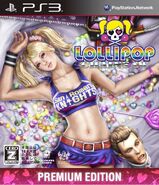 Retrieved from "https://suda51.fandom.com/wiki/Lollipop_Chainsaw?oldid=25468"
Community content is available under CC-BY-SA unless otherwise noted.