The LB dollar (sign: LB$) is the official currency used in Santa Destroy in both installments of the No More Heroes video game series. Although the city is located in the American state of California, the United States dollar has been somehow overthrown as the dominant currency in the area. It is unclear what "LB" is meant to abbreviate, although the term may be a pun on English pounds and pound-mass, initialized as 'lbs.' The conversion rate between it and other currencies is unclear, although the digits in LB pricing tend to run quite high. The cheapest jackets sold at AREA 51 cost LB$29,800, while sunglasses cost LB$19,800. Bizarre Jelly is the most expensive jacket in No More Heroes, at a total figure of LB$258,000.

There may be one example of currencies other than LB dollars in Santa Destroy, in that Burger Suplex advertises their Super Fire Hamburger Special at $4.30. Whether this actually refers to LB$4.30, the United States dollar, or another currency altogether is unclear.

In No More Heroes 2: Desperate Struggle, the LB Dollar depicts assassin Million Gunman rather than a U.S. President or other notable North American historical figure. The origin of the bill is labeled as "The United States of Santa Destroy". There is also a texture for a brassy coin that presumably depicts an LB Quarter, which features the Crash Star along with words inscribed in Yiddish.

When Travis Touchdown gathers real life money from playing inside the Death Drive Mk II game worlds, his rewards are also measured in LB dollars. His purchases from the Vanishing Point T-Shop are even paid using LB dollars, despite Touchdown residing in Texas and not Santa Destroy at the time. 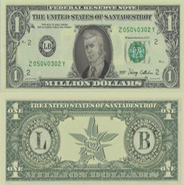 An LB Dollar in No More Heroes 2: Desperate Struggle.

An LB Quarter in No More Heroes 2: Desperate Struggle.
Add a photo to this gallery
Retrieved from "https://suda51.fandom.com/wiki/LB_dollar?oldid=25359"
Community content is available under CC-BY-SA unless otherwise noted.