Kosuke Kurumizawa is the main antagonist of The 25th Ward: The Silver Case. He is an Observer who harnesses Kamui Uehara's power to attain a post-physical level of reality.

Kurumizawa originates from Ward 24, but much about his past has been officially erased. He is first brought up as an unrelated case that Mokutaro Shiroyabu and Hina Sakaki are discussing in #01 new world order. He was the building administrator of the Bayside TowerLand condo, and his body was found mangled beyond recognition with its mouth stuffed with female hair. Only one piece of evidence was even able to confirm the body as his, and no further information was able to be found regarding Kurumizawa's history.

He was thought to be just another victim killed by the delivery guys of the Postal Federation for similar petty reasons to the others killed in the building, but this hypothesis is challenged when a bucket containing human flesh in a plastic bag is dropped from off of a skyscraper. This methodology recalls a similar garbage-dropping incident that led up to the supposed murder of Kurumizawa, and Shinko Kuroyanagi deduces that this is actually a message being sent by Kurumizawa who is still alive. Shiroyabu goes out to investigate the case on his own, and is set up through a series of battles with the Okiai hitmen to engage in combat with the seemingly-living Kurumizawa at the Alternative Batting Center.

Meanwhile in the 24th Ward, the Heinous Crimes Unit were already aware of Kurumizawa and investigating a murder he committed, which he notified them of in a video clip. However, in the video clip, Kurumizawa appears not as a human but as an anime character; despite this, analysis of the video concludes that the shadows and lighting of the video are not possible to be simulated, and that Kurumizawa must truly look like that. In their investigations, they find another corpse of Kurumizawa's at the Rental Warehouses and contend with video footage and live appearances of Kurumizawa in multiple art styles, and eventually discover that the murder was faked through altering their perception of reality in the first place.

The results of Shiroyabu and Kurumizawa's battle are ambiguous; Shiroyabu claims to have won, but Kuroyanagi accuses him of being a pawn of Kurumizawa. In any case, Shiroyabu definitely attains some of Kurumizawa's abilities after the battle and tries to eliminate Kamui Uehara (and thus acting in favor of the ward's "life").

It is suggested by the characters that Kurumizawa attained this state through becoming an observer who could never be observed. By observing (and defining reality) without being observed (and thus never being defined in reality) Kurumizawa is able to cheat physical reality and live on as a "digital man" within the system of the cities and Kamui Uehara. He chooses not to die, and so he doesn't. Through this, he is able to exist in the "world of the dead" that other apparitions (such as Remnant Psyches) exist in. It is later revealed that Kurumizawa is also the "cursor" through which gameplay actions are performed by the player, and it is also implied that he is the running man controlled on the chapter select screen.

In Travis Strikes Again it is revealed that Kurumizawa was once Dr. Juvenile's boyfriend. Travis finds him living in a partially underwater house in the middle of the ocean, possibly in the ruins of The 25th Ward. Kurumizawa then tells Travis about how Juvenile had a certain mysterious transparency. He wishes he would've known Travis sooner so they could have started a revolution against justice itself, before giving a death ball to Travis and dissapearing. Kurumizawa refers to his talk with Travis in the past tense. 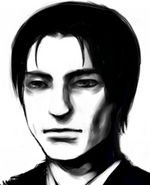 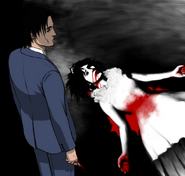 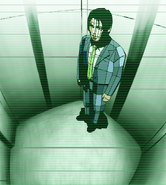 electride
Add a photo to this gallery
Retrieved from "https://suda51.fandom.com/wiki/Kosuke_Kurumizawa?oldid=27483"
Community content is available under CC-BY-SA unless otherwise noted.