Not to be confused with Morikawa from Lollipop Chainsaw.

Kiyoshi Morikawa (モリカワ キヨシ, Morikawa Kiyoshi) is a character in The Silver Case. He is a member of Heinous Crime Unit 1 in the 24 Wards Police Department.

Morikawa is an old colleague of Tetsugoro Kusabi. Like Kusabi, Morikawa previously worked as a regional agent before joining the Heinous Crime Unit upon its formation. He is frequently absent from the office, instead preferring to carry out detective work at the crime scene itself. He is romantically attracted to his colleague Chizuru Hachisuka, who consistently rebuffs his advances despite secretly harboring a soft spot for him.

Morikawa played a key role in The Silver Case by filing his own reports based on the early case to the Chief Director of the HC Unit, Shinji Kotobuki.

Morikawa arrives to the scene, fashionably late. He introduces himself to Akira and passes the buck on to the Kusabi and Sumio.

He serves as an advisor only on this case, leaving himself and Hachisuka to collect evidence with Morichika Nakategawa.

Later in the case, he receives vital information from Ryu Munakata about the location of Kamui's new hideout in the form of a love letter. He gives the letter to Kusabi for safekeeping. Sumio and Akira go in Kusabi's stead to the Studio Gladiolus.

Arrives late to relieve Akira from duty. He and Hachisuka have a quiet argument over his tardiness. This prompts Akira to see the boy in the window...

At HC Unit Office, he takes in Akira as his new partner after Hachisuka is sent on leave by Kotobuki. The two split up, with Akira taking the footwork portion of the case. Morikawa collects the various articles of information from his office.

At the midpoint of the case, he and Kotobuki offer Akira a spot as the newest member of HC Unit 1. Using the 100 question Kumite, Morikawa tests his new charge. Pleased with the results, he and Kotobuki authorize Akira as a full-time agent.

During the last part of the case, Morikawa sees a very casual looking Hachisuka. He promptly tells Akira to stop the car. Electing to stay with Hachisuka, he sends Akira ahead to fully solve the case of the mysterious suicide.

He and Nakategawa give their final assessment of what Akira discovered. And the three men agree to leave the matter as a suicide to spare the other party in the case from being disposed, as he was just a minor and was not a high risk to be infected by the Crime Virus. 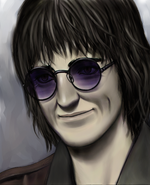 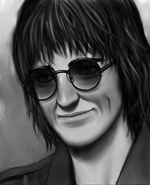 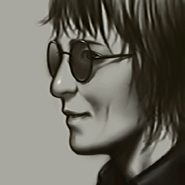 Retrieved from "https://suda51.fandom.com/wiki/Kiyoshi_Morikawa?oldid=26149"
Community content is available under CC-BY-SA unless otherwise noted.