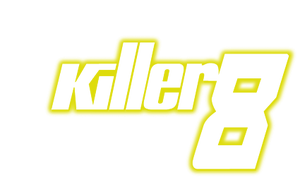 killer8 is an additional game mode in killer7, unlocked by completing the regular game on any difficulty. Upon starting the game, the title screen will transform into a yellow killer8 logo resembling the basic killer7 logo. killer8 is distinguished from the regular killer7 mode by its inclusion of Young Harman Smith as a playable character, as well as its dramatically increased difficulty.

Only one difficulty level is available on killer8: "Bloodbath", in which all enemies inflict significantly more damage on the Smiths. In fact, every single persona except MASK and Young Harman will be instantly killed from a single Heaven Smile explosion. Heaven Smiles also have increased amounts of health, making them much harder to kill.

In addition, Smiles' weak spots are now permanently invisible (obviously this does not apply to Smiles whose weak spots are always constant, such as Spiral Smiles and Ulmeyda Smiles). Smiles can still be killed instantly as normal if their weak spots are shot, however.

Other minor changes include the removal of all help icons on the map (apart from Harman's Rooms) and the non-inclusion of the tutorial room at the beginning of Angel. Reviving personas is also now much harder, as the player must press the A button far more rapidly than before.

Harman Smith appears in killer8 in his 'younger' incarnation (as he appears to Garcian at the top of the Union Hotel), and wields an old-fashioned tommy-gun which he carries over his shoulder. This will make short work of most smiles thanks to its rapid-fire rate; however, Harman cannot receive any upgrades whatsoever, although the Power Ring and Stamina Ring will still affect him. Thanks to his incredible amount of health, Harman can resist at least one Heaven Smile attack before dying, unlike most of the other personas. Harman is the only persona to always be available from the beginning of every mission (excluding Lion).

Apart from this, Harman has no special abilities and his presence does not alter the story in any major way; the only difference is when the Smiths confront Greg Nightmare and the Black Heaven Smiles - as the number of Smiles remains at 7, Garcian can simply pick up the Golden Gun and kill Nightmare without having to kill a Smile first (since Harman is killed by the Smile which would have otherwise targeted Garcian).

Retrieved from "https://suda51.fandom.com/wiki/Killer8?oldid=27281"
Community content is available under CC-BY-SA unless otherwise noted.