We Are Finally Cowboys

Henry Cooldown (ヘンリー・クールダウン, Henrii Kuurudaun) is a character in both installments of the No More Heroes video game series. He is introduced as a 27-year-old Irish assassin, who was raised in Ireland. He is Travis Touchdown's twin brother, although his surname, Cooldown, is never mentioned in-game. He was married to Sylvia Christel in the first game, who apparently never took on Cooldown as a married name. Henry is voiced by Quinton Flynn in No More Heroes and No More Heroes 2: Desperate Struggle, and is voiced by Mark Allan Stewart in No More Heroes 3.

In No More Heroes, Henry had auburn hair with blue eyes. He wears a full gray outfit and wields the Cross Sword, a beam katana similar to Travis' Tsubaki Mk-III. In No More Heroes 2: Desperate Struggle, he wears a similar outfit, without the coat and a darker vest and pair of pants (As well as a skullpin on his tie). Also, his hair seemed to have darkened inbetween games and his skin color seems to have paled as well. Like his brother Travis, Henry enjoys fighting, and according to himself he and his brother aren't very different. Henry also seems very laid back and content with his role as the "cool, handsome foil who happens to be Travis's twin brother". He also leaves very long voice-mail messages; in one he imparts his belief that he is the older of the two or that he 'popped' out first, referring to Travis as his baby brother.

Henry is first encountered in No More Heroes as a shadowy figure in the Senton Splash Tunnel of Santa Destroy, on Touchdown's way to the Ranking Battle versus Letz Shake. Henry and Travis meet face-to-face after Henry kills Letz Shake before Touchdown can challenge him for his United Assassins Association title, thus igniting a rivalry between the two. He later challenges Touchdown to one final duel outside the Motel "NO MORE HEROES" after Travis becomes ranked first in the UAA. As their battle ensues, Henry reveals that he is both Touchdown's twin brother and Sylvia Christel's husband of ten years.

In No More Heroes 2: Desperate Struggle, Henry does not appear until halfway through the game where Travis heads to Destroy Stadium to compete in a battle royale between himself and twelve other unidentified assassins. Travis discovers that the apparently alive Dr. Letz Shake, who Henry actually killed during the last game during the infamous 5th Rank fight, has exacted his revenge on Henry (who forced him to move into what he considers an inferior body) by allegedly defeating him and freezing him in carbonite. When Letz Shake is defeated, Sylvia recovers Henry and leaves him in Travis's motel room after unfreezing him. During this time, Henry is busy fighting off a nightmare of an anime-like female dream creature called Mimmy, who annoys Henry by reading his thoughts and attempting to keep him inside of his dream world. The two fight despite both trying to convince the other to follow, and Henry emerges the victor by impaling Mimmy and, as the end battle text claims, "disintegrates" her. This causes Henry to wake up in Travis's bedroom while Travis is in the middle of masturbating to one of his fetish anime, causing a moment of both disgust and reconciliation between the two brothers.

This is later disproved when Henry vanishes in the next scene, blaming himself for allowing Travis to rescue him and deciding to have sought out and killed the next three assassins in Travis's way free of charge just like Shinobu before him. He informs Travis of this during an extremely long phone message, and even leaves three photographs describing the assassins and at the same time mocking the player by claiming that "you'll just have to drool over them" and "you'll never get to play through these fights, the game's stuffed full anyway". After this, Sylvia soon reveals that the two have become divorced (for obvious reasons) following some point after the first game.

In the game's climatic final battle, when Travis is distraught after being being led to believe that Jasper Batt, Jr. had murdered Shinobu, Sylvia and Henry, Henry arrives through the window to save Travis by slicing off one of Batt's machine's arms and fending off Batt's automated bat-shaped robots while Travis took on Batt individually. Then, as Travis fights Batt's second form, Henry stands by and watches from the wall nearby, only to decidedly exit the battle after Batt transformed into his third, monstrous form despite Travis's heeding, stating, "I can't be associated with that travesty. I mean I've got standards, for fuck's sake!" Henry is not seen again for the game's ending.

Henry's fighting style represents similar tactics with more honorable, knight-style swordsmanship in comparison to Travis's rougher, more unrefined and slightly grunge fighting style (which can vary depending on his beam katana, but remains unrefined nonetheless). Henry's attacks arguably induce more damage on the boss at base level when compared to Travis's moves, which can be seen as primarily splash damage and charged attacks compared to Henry who invites swift strikes, jumping slashes, and even backflips into his repertoire. This is easily witnessed during his final boss battle in the first game. Also, Henry is able to channel his katana's raw energy into the form of three discharging spheres that automatically target his opponent - a somewhat similar technique that Travis has used with his Blueberry Cheese Brownie Dark Side, despite only throwing out one, yet devastating sphere. It is unknown if this shows Henry's superiority with a beam katana, or simply an ability unique to his katana as no other user is seen doing this.

During gameplay, one of Henry's special skills is the ability to dash[1] (although this skill is less than unique, as Touchdown could also be capable of this after learning the Technique of Bizarre in No More Heroes). Another one of his abilities is his long range attack, where he fires purple orbs of energy from his Cross Sword. As with Shinobu, another playable character opposite Touchdown, the player will not be able to choose to play as Henry at will - strangely, Henry is only playable for the boss-exclusive stage against Mimmy.

Henry appears on three trading cards in the Design Materials set of No More Heroes. These are No. 88, No. 89 and No. 147.

Henry and Travis fighting at the end of No More Heroes 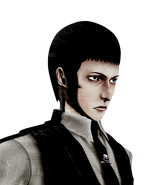 Henry in No More Heroes 3

Close-up of Henry in No More Heroes 3