Dr. Juvenile (ドクター・ジュヴナイル, Dokutā Jubunairu) is a character in Travis Strikes Again: No More Heroes. She is a game creator, designer, and developer employed by the video game development studio HAZRE.[1] She is responsible for the creation of the highly dangerous Death Drive Mk II.[2]

Dr. Juvenile is a blond woman garbed in a black mini-dress with matching thigh-high stockings underneath a lab coat. Her lab coat features a flame pattern on the hems and an assortment of colorful badges over the right breast. She wears a stethoscope attached to large headphones around her neck. She carries a doctor's bag.

Her heavy, black eye make-up runs constantly as a result of crying. She has a prominent tattoo of an indigenous-styled eagle on her decolletage.

Initially, she appears condescending, making furtive jabs at Travis' intelligence while explaining the controls to him. However, accounts of her character by the many people she's interacted with during her career depict a tortured figure, one whose life is characterized by pain and loss. By the time Travis meets her face-to-face, she is wholly consumed by her anguish over the legacy of her greatest creation.

She is described as being "complicated" and "hard to explain". Despite this, she seems to enthrall nearly everyone she meets, and other characters often sense how unusual she is. Even Travis himself feels a connection with her, appreciating her work and ultimately being able to empathize with her pain.

Dr. Juvenile was mentored by John Winter, the developer of the original Death Drive arcade machine. She created the Death Drive Mk-II as a means to continue her mentor's work and to pay homage to the history of video games.[3]

Juvenile's precise visions often conflicted with her ability to complete games. Death tells Travis Touchdown that in her frustration with the progress made on Killer Marathon, she flipped tables and forced the staff to start over from scratch. Bugxtra is also familiar with her ethic, explaining that she attempted to have Serious Moonlight cancelled because the technology at the time could not fully realize her vision of the game. When her request was rejected, she shifted the game into a continuation of Shadows of the DAMNED. Touchdown admits to White Sheepman, Juvenile's avatar within the game world, that after playing all six games he can understand her anger, especially considering none of her work was even released publicly.

Klark elaborates on Juvenile's early childhood in fax No. 10400 K, mentioning that Juvenile's country of birth is Ukraine and that she was orphaned by the Chernobyl disaster.

During her time in America, she was adopted by Patrick Granada Jr., a social worker according to fax No. 10302 K. Her brilliance caused her adoptive father to spiral into madness, and her adoptive mother was stated to be violent towards her. Her deteriorating homelife culminated into the murder of her adoptive mother by Granada, who then became the serial killer Mr. Doppelganger. Granada had tried to murder her as well, but she survived. This experience affected her deeply, resulting in the creation of Life is Destroy, a video game depiction of Granada's first killing spree through a neighborhood in Santa Destroy.

It is mentioned in fax No. 10300 K that at ten years old, she was scouted by the US government to work on a secret project involving the Death Drive Mk-II. With the aid of her mentor, John Winter, and Klark, she would go on to develop six games for the console. The development of these games would lead her to collaborate with several different developers, including Taiwanese developer Notsuma and Damon Riccitiello, the current CEO of the Utopinia corporation.

Her career took her all over the world, where she formed relationships with a myriad of people. She entrusted the Death Ball containing Life is Destroy to her former roommate, Akari Tsukiyono, in Kansas. Her third title, Coffee & Doughnuts, was purchased at auction by Nigel McAllister, a former MLB star and owner of the Texas Bronco doughnuts franchise. Oddly enough, the Death Ball for Golden Dragon GP ended up inside Count Dracula's head all the way in Romania. She is also known to have resided in Ershiwu Long City in Ward 0, according to her former best friend Chillko, where she gave Killer Marathon to her ex-boyfriend, Kurumizawa. The development of the final game, Serious Moonlight, was so fraught with conflict that it resulted in Damon Riccitiello (then an intern at HAZRE) beating Juvenile to unconsciousness before stealing the Death Ball from her. In a later excerpt, it is jokingly implied that she once had a relationship with Frank, the man credited for the Death Balls' hardware.

Regardless of her efforts, the Death Drive Mk-II was never released to the public. Instead, the US government intended to use the technology to clone supersoldiers, who could then be controlled by a mother machine housed underneath CIA headquarters. The trigger to the Death Drive AAA's awakening was the completion of all six games, so Juvenile sought to avoid this fate by introducing Bugs into the games' code and scattering the Death Balls. She and her lover, Klark, went on the run for 30 years in order to evade the CIA.

During the events of the game, she eventually returns to CIA HQ and barricades herself inside the room with the Death Drive Mark I. When Travis finally confronts her, she has already transformed into her avatar inside the virtual world, White Sheepman. Despite Travis' reluctance, the two do battle, and Travis successfully defeats her. Her final words to him are, "In the human world, the time for games has ended, nothing binds us now," before dissolving into shreds of light.

Juvenile is demonstrated to be highly resourceful and intelligent. She is the primary inventor of the Death Drive Mk-II, a machine that can blur the line between reality and video games. She possesses an uncanny ability to influence others and can speak multiple languages fluently. It is implied at various points in the game that she is able to see the future, demonstrated by how she was able to create DAMNED Dark Knight (a teaser for a Shadows of the DAMNED sequel) decades before the original was even released.

As White Sheepman, she resembles a godlike figure, able to seamlessly alter reality in order to fight Travis at CIA HQ. In this form, she wields a glowing scepter which she can use to defend herself and create projectiles. Her abilities include teleportation, summoning explosive tracking bubbles, opening a vortex that draws Travis to the center of the screen, setting traps around the battlefield, producing a checkerboard field effect; and, when her health is low, dropping an undodgeable sphere of light which will kill Travis instantly. 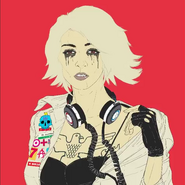 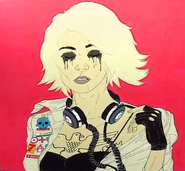 Concept art by Boneface.
Add a photo to this gallery

Retrieved from "https://suda51.fandom.com/wiki/Dr._Juvenile?oldid=27708"
Community content is available under CC-BY-SA unless otherwise noted.