The Death Drive Mk II is a game console in Travis Strikes Again: No More Heroes and a member of HAZRE's Death Drive line. It was developed by Dr. Juvenile in the 90s.[1] It is described as phantom-like by Badman, who recognizes it in Travis Touchdown's trailer and suggests it has been missing. When Touchdown and Badman begin fighting, the eyes of the Death Drive Mk II glow red and the gloves begin to levitate, absorbing both men into the console.

The console's main unit appears to be a small crouching statue resembling the Aztec goddess Tlazolteotl giving birth.[2] Attached to the ports are two left-handed virtual reality gloves which assume different appearances depending on whether or not the player is currently in the game. The console plays Death Balls (cartridges heavily resembling human eyeballs) which are deposited into the pot at the top of the unit.[3]

Announced "way back in the day", the Death Drive Mk II was pulled before it could be made available on the market due to how dangerous it was. After putting the Death Ball into the console and loading it up, players would get sucked into the game and killed.

It is said that whoever collects and beats all six of its games will have their wishes granted.[4] 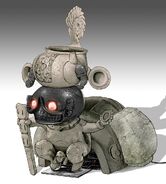 The front of the console. 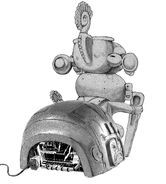 The back of the console. 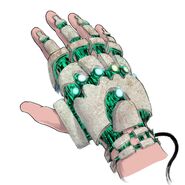 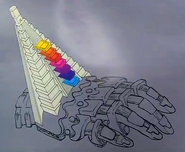 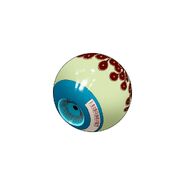