David himself is somewhat of an opposite to Mondo, despite being brothers, with his outlandish personality, desire for absolute power, and outrageous clothing. Compare this to Mondo's lack of wants, black suit, and Mondo's general overpermissive nature, the difference is night and day. 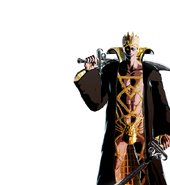