Chizuru Hachisuka (ハチスカ チヅル, Hachisuka Chizuru) is a character in The Silver Case. She is a special agent in Unit 1 of the Heinous Crimes Unit.

Unlike her more eccentric colleagues, Chizuru takes a scientific and analytical approach to solving cases. This causes frequent tension between her and the others, who regard her methods as impractical despite their realism. She is also the only female in the Unit for most of the game, which makes it even harder for her to get along with the somewhat misogynistic older members. She has a troubled relationship with her partner, Kiyoshi Morikawa, but they harbor feelings for eachother.

Chizuru was the daughter of the mayor, Kaoru Hachisuka, and the sister of Tokio Morishima. She was selected to be experimented on as one of the girls in the Shelter Kids Policy, where she was primed as a stock body for Ayame Shimohira. After the project was concluded, her memories were wiped and she found herself entering the Administrative Inspection Office, where she eventually became an HC Unit investigator.

In case#1:decoyman, she is formally introduced to a mute Akira. He is dragged along with Sumio and Kusabi, as both men didn't want to leave him at IMM. She appears cordial to Akira, as she realizes his state. She is later seen back at the HC Unit Office arguing with Kusabi about the merit of her science against his leg work. After a lecture about data, Kusabi storms off with Akira and Sumio.

In case#2:spectrum, due to Morikawa's tardiness, she has to reluctantly call in a recovering Akira to answer the suicide call at Typhoon. She is rude to Morikawa when he finally shows up, due to his lateness. They continue to argue back at the office. Fed up with his dismissiveness and casual attitude, she requests Shinji Kotobuki to transfer Morikawa. The Chief elects instead to offer her a chance to resign. He coldly remarks that she needs to reconsider her line of thinking. Deciding to cool off instead, Kotobuki sends her on leave to think about her future.

During the case, she is spotted by Morikawa and Akira, driving recklessly. Morikawa elects to have Akira finish the case while he talks to the distraught woman. After the case is solved, Chizuru apologizes to Akira for her behavior towards him. She flippantly blames the incident on PMS and offers to go on a date with him as a show of gratitude for babysitting Morikawa. (This is not shown to actually happen.)

By case#4:kamuidrome, Chizuru's nature becomes detached and indifferent as part of her latent Ayame personality beginning to activate. When remarking on the suicide of Sayaka Baian, she blamed the suicide on the victim. This causes Morichika Nakategawa to comment on her cold hearted nature since her leave. Morikawa tries to deflect the negative attention away from her and restore focus to the case at hand.

Chizuru is last seen normally in case#5:lifecut in the IEDU Building, as the HC Unit and Public Security hunt for Kamui Uehara. As they chase the killer, Hachisuka encountered Akira and his new charge, Sakura Natsume. Sakura started realizing the futile actions of killing Kamui. Showing the inquisitive nature that Chizuru used to have, Sakura questioned their assignment, but Hachisuka showed an emotionless and cold nature to the woman, promising to dispose of her when they next meet.

After her disappearance, she is charged by Nakategawa with the disposal of Kusabi and Morikawa, due to their abandonment of the mission. Akira meets her in the Mass Production Center, where she has fully become the next Ayame Shimohira. She taunts Akira for a moment, as she was waiting on Kusabi to appear instead. With her last words lamenting her love for Morikawa, she asks Akira to kill her. Instead, she is shot twice by Sakura, with the fatal shot in the head. The last image that is seen of Chizuru is the bullet wound and a single tear down her face. 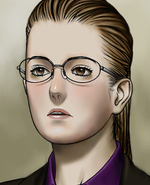 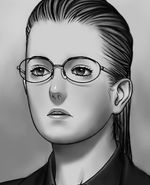 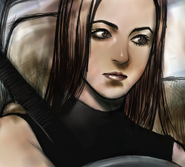 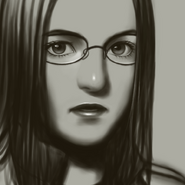 Ayame
Add a photo to this gallery

Retrieved from "https://suda51.fandom.com/wiki/Chizuru_Hachisuka?oldid=26147"
Community content is available under CC-BY-SA unless otherwise noted.