Suda51 Wiki
Register
Don't have an account?
Sign In
Advertisement
in: Assassins, Males, Bosses in No More Heroes 2: Desperate Struggle,
and 4 more

"Charlie has countless girls on their hands and knees. A natural-born playboy, he's a celebrity of sorts. Even I caught myself checking him out. Just looking into his eyes got me hot. Charlie and his groupies have a bond that cannot be broken. So much that when their breathing is synchronized, it's a warning sign that would make even a lion shiver." --Sylvia Christel on Charlie

Charlie Macdonald (チャーリー・マクドナルド, Chaarii Makudonarudo) is a character in the video game No More Heroes 2: Desperate Struggle. Described as a "natural-born playboy" by Sylvia Christel, Macdonald is a football star at Destroy University and is ranked 25th in the United Assassins Association. He cooperates with the university's cheerleader squad, who occupy ranks 49 through 26, in Ranking Battles. Together they summon a giant robot called Santa Death Parade. Travis Touchdown faces Macdonald's posse and the Santa Death Parade in a mecha of his own, styled after Pure White Lover Bizarre Jelly's Glastonbury, and the two robots do battle towering over the buildings of Santa Destroy.

Arriving at Santa Destroy University's football stadium, Touchdown watches cheerleaders perform a routine before Macdonald steps out to greet him. Macdonald expresses his honor for Touchdown and an admiration particularly for his name. Initiating the Ranking Battle, Macdonald activates a switch on his football and he, along with his cheerleader posse, launches into space where the team transform into the Santa Destroy Parade mecha. Touchdown responds to this by summoning a Glastonbury mech replica and accepts Macdonald's challenge. The two mechs battle above the streets of Santa Destroy and ultimately Macdonald loses power to the Santa Death Parade, giving Touchdown the opportunity to hurdle the mech into space and detonate the mech and all inside with Glastonbury's laser rifle. Afterwards, Christel congratulates Touchdown on his victory, but explains that his Glastonbury mech must be confiscated because the UAA have deemed it a public nuisance.

Macdonald wears a large American football uniform, mainly green and yellow, which sports his rank number, 25 in neon. His personality is a cliché of the stereotypical jock, as he appears overconfident and is flirtatious with his many cheerleaders. However, he is able to respect Travis Touchdown, expressing honor in facing him and even complimenting his name (albeit an obvious football reference). Macdonald's cheerleaders appear very devoted to him as they fight alongside him and arrange a routine in his honor.

Macdonald battles using a mecha called Santa Death Parade, shaped after a football, which uses energy waves and crushing melee attacks. He also appears to harbor rockets somewhere in his uniform, which he uses to launch into space when preparing to form Santa Death Parade. Macdonald also throws a football-shaped projectile at Touchdown at incredible speed, which may explain why he is such a prominent football player. 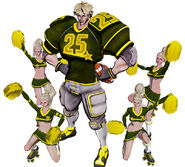