Cannot be harmed except from behind

Backside Smiles (バックスマイル, Bakkusumairu, lit. "Back Smile") are enemies featured in killer7. They are a variety of Heaven Smile which first appear at the KAKU Building during the second half of Target01: Sunset.

Backside Smiles are unique in that they appear to float several feet above the ground, unlike most kinds of Heaven Smile. They are virtually indestructible; however, if the player repeatedly shoots the sickles on their wrists enough, they will spin round, turning their back to the Smiths and exposing a vulnerable tumour-like growth on their back. Shooting this weak point will kill them instantly. 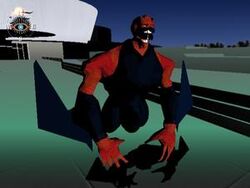 Retrieved from "https://suda51.fandom.com/wiki/Backside_Smile?oldid=22822"
Community content is available under CC-BY-SA unless otherwise noted.