Member of Republic, member of the Heinous Crimes Unit

Akira (real name unknown) is the protagonist of the Transmitter cases in The Silver Case, as well as the white out chapter in The 25th Ward: The Silver Case. Initially a member of Republic, he is later recruited into the Heinous Crimes Unit following the failed mission to apprehend Kamui Uehara. The player is asked their name at the beginning of the game, which becomes Akira's name.

Akira's personality is rather unclear to both the characters and the player, and even his name is only a codename. He is a big, intimidating and stoic man, and a very good soldier and investigator. He is never shown speaking, and is even implied to be mute due to psychosis from the events of the Kamui mission, though interrogation scenes later on imply that he has some other way of communicating. Tetsugoro Kusabi takes a liking to him and calls him "Big Dick", and describes him as looking like a chinchilla. Tokio Morishima, on the other hand, is terrified of him due to associating him with a traumatic experience at the Babylon Shopping Center.

Akira was originally one of the children who grew up in the Shelter as a stock body for Kamui. Later on, his memories become erased and he is recruited into Republic as a special agent. Following the destruction of Republic, Akira is discovered at IMM Hospital by Kusabi and Sumio Kodai who bring him with them for the investigation; later, he is formally hired into the HC Unit, where he helps on many missions. After the 1999 Kamui's execution, he finds his way to the Shelter, upon which some of the characters begin referring to him as Kamui; it is revealed that Akira is the next body that Kamui will transfer into. Tetsugoro goes back on this later, however, saying that whether Akira becomes Kamui or not is up to him.

In 2003, as shown in #06:white out, Sakura Natsume is his new commanding officer. While underground looking for the Joker, Mokutaro Shiroyabu mistakenly believes Akira to be the Joker instead. He shouts at Akira to answer him, but being mute, Akira cannot; before Shiro can fire, though, Kusabi interrupts the altercation. Kusabi clears up the misunderstanding, and Akira and Shiroyabu work together to go after the Joker. They corner him at the Hachisuka Dome; however, following the conclusion of the case, nothing is known of what happened to Akira. 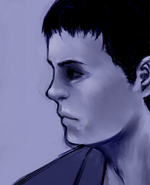 In the Republic body armor

As seen by Tokio
Community content is available under CC-BY-SA unless otherwise noted.
Advertisement