Suda51 Wiki
Register
Don't have an account?
Sign In
Advertisement
in: Assassins, Bosses in killer7, Characters in killer7,
and 4 more

Girl at Immigration and Naturalization Service

Extraordinary speed, the ability to become immaterial in darkness

"Like a flower that blooms in the soil of our carnal and corrupt society, I shall administer retribution to straying vermin that graze this land. For I am the Chairman of the Educational Guidance Council, AYAME Blackburn!"
—AYAME's brainwashed speech.

AYAME Blackburn is a character in the video game killer7. As an orphan, she is present at the Immigration Bureau where Curtis Blackburn attacks. After killing everyone in the building, Blackburn turns his gun on the girl, however her fate is not shown. It is later revealed that Curtis actually trained her in combat, dubbing her AYAME Blackburn in the process. An avid cosplayer, AYAME dresses in a Japanese schoolgirl uniform and hides her identity behind an animegao mask, creating a "magical girl" persona.

AYAME is first encountered in ISZK Land in "Encounter". While looking for Curtis, the Smith Syndicate run into her in a parking lot, where she introduces herself as the "Chairman of the Educational Guidance Council", and defends a bus presumably filled with orphans Curtis is preparing for his organ trade. Here she runs around the perimeter sporadically firing two machine guns, her speed making it difficult to hit. The Smiths best her however, and she flees the scene on the bus she had been protecting.

After locating and infiltrating the Blackburn Residence, the Smith Syndicate face AYAME again in one of the home's chambers. This time, she hides behind a series of shutters that open and close at random, only to suddenly appear in one of four shafts of light to open fire. AYAME is overwhelmed by the Smiths and dies in combat. Falling to the ground, AYAME's mask dislodges, revealing to the player her identity as the Immigration Bureau orphan, although the Smiths are unaware of the significance. AYAME Blackburn's birth name is not clarified, and Hand in killer7 refers to her as the "Girl at Immigration and Naturalization Service". 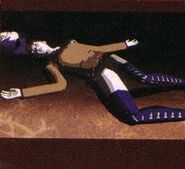 Ayame's mask is knocked off when she dies, revealing her face.